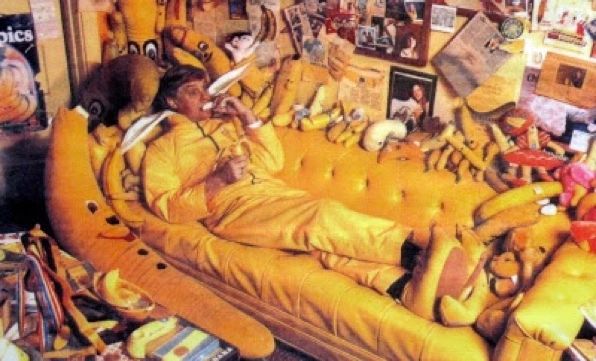 This "Fun Bunch" has been going since 1972.  WE WILL CELEBRATE YEAR 51 IN 2023!!  Our membership card serves as an ice breaker, discount card and special treatment vehicle.  The perfect GIFT for any and all occasions!  This is a ONE TIME/LIFETIME membership fee.  The ONE card that makes YOU smile!

Since 1972 The BANANA CLUB's PURPOSE IS TO KEEP YOU SMILING and offers everyone more attention, recognition, discounts, more FUN with just one CARD! Above...Lori TBD I, Chris TBW, Ken TB, Cheri TBD 3, and Julie TBD 2

Above is the "Bananister "  Bannister family in the Altadena I.B.C. Museum and Club headquarters several years ago.  The Club was founded in 1972 by Ken Bannister, T.B. (Top Banana) and the Banana Museum opened in 1976 in Altadena, CA.  This social membership "FUN" bunch is known the world around.  There are over 35,000 card carrying  B.C. members in more than 27 countries!  The Banana Club & Museum has been featured on over 105 TV shows  including the "TONIGHT SHOW"!  FEATURE ARTICLES & PHOTOS have been published is most national magazines, all major newspapers and 12 successful/ published books including the "GUINNESS BOOK of WORLD RECORDS" (2005 record for the most items devoted to one fruit documented ) ALL  have all published feature   articles and programs.  All forms of the media has featured this bunch multiple times for over 49 years!  See all the  YOU TUBE videos on line.   : )

The Club got started back in late 1972 when Ken was handed a 10,000 count roll of Chiquita banana stickers (via his secretary whose husband was a stevedore unloading bananas at the docks in Long Beach CA. )  Ken put them in his briefcase and took them to professional photographic trade shows, then handed them out to convention attendees telling them to affix them to their I.D. badges and they would get discounts from manufacturers at the shows!  It worked!, and soon Ken had Banana Club stickers made up with the B.C. logo to hand out.  The photographers earned merits for hanging prints, so Ken offered B.M.'s (Banana Merits)  for sending him anything tasteful to do with bananas! : )  That is how the collection was amazed to a count of over 17,000 items (documented by Guinness in the 2005 Golden Anniversary Book).   A dozen press agencies have done feature "shoots" on the Intl. Banana Club  and that has led to thousands of FEATURE articles and TV features around the world multiple times!  We will continue our mission to keep people smiling , stay positive and in good health!

Our purpose is to provide everyone with a vehicle to keep people smiling, keep spirits up,  get more attention, get discounts on just about anything,  We give you the title of your choice and  encourage you to stay in good health!    For just a ONE TIME/LIFETIME membership fee of just $10.00 you can join this bunch and get the card you don't leave home without!   Most members are C.H.D.'s (City Hand Directors) in charge of a bunch or F.D.'s (Finger Director) in charge of themselves.  Ask for a special title and you will get it.  We have L.B.'s (Legal Bananas) , DR. BANANAS),  you name a title and you get it.

Simply showing the BANANA CLUB card with a smile on your face is guaranteed  to get you special favors like discounts and upgrades!  Put your title on your business cards and stationary and see the reaction.  RECOGNITION is important and you can get it here in the form of B.M.'s! (Banana Merits) Yes, anything sent to us to do with bananas in good taste earns you BANANA MERITS!  Keep track and when you get to 100 you can  get an M.B. degree (MASTER OF BANANAISTRY)  Or....500 banana merits  gets you a PHB (DOCTORITE OF BANANISTRY).  Nothing lude, crude or lacivious is accepted!  (& you get demerits!

WE HAVE ALWAYS RECOMMENDED THAT EVERYONE EAT ONE BANANA FIRST THING IN THE MORNING AND GET THAT ENERGY CHARGE ITH THE 98 QUICK CALORIES, THE MANY VITAMINS, THE FIBER AND OTHER BENEFITS THE BANANAS OFFER US ALL AND FOR ONLY ABOUT 12 cents!  THEY COME IN THEIR OWN WRAPPER, DON'T SQUEAK, LEAK OR SQUIRT!  AND, NO BONES!

SHOWING THE BANANA CLUB MEMBERSHIP CARD ANYWHERE BRINGS A SMILE TO ANYONE'S FACE YOU SHOW IT TO!

Above, Ken was a featured guest on the Tonight Show  in a key guest segment along with actress Kelly Lynch and Brooks and Dunn.

FOR over 51 YEARS OUR CLUB HAS BEEN GOING STRONG IN OVER 37 COUNTRIES!  WE WERE SELECTED AS THE BEST CLUB/ASSOCIATION OF 2021 & 2022  IN OUR HOME  BASE CITY OF APPLE VALLEY!  YOU WILL GET MORE  SMILES ,DISCOUNTS, UPGRADES AND MORE ATTENTION BY JUST SHOWING YOUR MEMBERSHIP CARD!  GET THE TITLE OF YOUR CHOICE.  JUST JOIN NOW BY CLICKING ANY OF THE BUY NOW BUTTONS !  DON'T DELAY!

YOU WILL GET MORE DISCOUNTS, UPGRADES AND MORE ATTENTION BY JUST SHOWING YOUR MEMBERSHIP CARD!  REMEMBER TO SMILE FIRST!  GET THE TITLE OF YOUR CHOICE AND PUT IT ON YOUR CREDIT AND I.D.  CARDS.

Check out this great video of Ken T.B. explaining  the International Banana Club & showing  the Banana Museum which was located in Altadena, CA (USA) for over 35 years!

"BANANA MAN ON THE STREET"

Check out Ken the T.B. talking about BANANAS  on  the TV show  "Banana man on the Street" shot  in Hollywood, CA

Who is this Banana Man? Ken Bannister

Ken is a well known professional sales expert and marketing genius.  He is the founder of the I.B.C. back in 1972!  2023  WILL BE OUR 51at YEAR going bananas for just fun !!   Over the last 65 years, Ken was a Sales Manager for Campbell Soup Company, built a photo manufacturing company known as Larson/Reflectasol around the world, owned a camera store in Temple City, CA , and operated three different professional Photo studio sites in Arcadia and Temple City, CA.  Then, served the High Desert in Southern CA. as a Realtor for 12 years based in Apple Valley, CA.

The Intl. Banana Club has been featured on 105 TV shows around the world, and features have been published in every major Newspaper and Magazine in the world. Also, 12  books featured the Club too.  (FEATURE  multi page  ARTICLES)  There have been over 35,000 card carrying members of the Banana Club around the world in 37 different countries.!    All members with a smile on their face when they show their card or have a banana! ( FRUIT OF THE WISE MEN AND WOMEN!)

GOING BANANAS with us PAYS OFF!

LIFE Membership is a privilage!

JOIN THIS BUNCH AND YOU WILL SMILE MORE OFTEN!  YOU WILL MOTIVATE OTHERS TO SMILE BY SHOWING YOUR B.C. CARD!  YOU WILL SAVE  MONEY USING THE CARD AND ASKING FOR  DISCOUNTS WITH A SMILE ON YOUR FACE!  YOU WILL GET MORE ATTENTION AND RECOGNITION USING YOUR TITLE AND ACQUIRING B.M.'S! (BANANA MERITS)...AND MAYBE AN  M.B. (Master of Bananistry)  OR PHB (Dr of Bananistry DEGREE!  DO IT!   Start your day with one BANANA (a "finger" & a SMILE!

Sign up for the club to hear from us about specials, sales, and events.